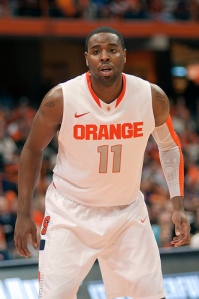 1. Syracuse (8-0) – The Orange remain unbeaten and pick up a non-conference top-10 win over Florida.

2. Louisville (7-0) – Peyton Siva and his Louisville Cardinals look very impressive early, like Cuse, picked up a big win in the Big East/SEC Challenge over No. 19 Vanderbilt.

3. Marquette (7-0) – Have to move the Golden Eagles up in the rankings after winning a road game at the Kohl Center over Wisconsin. It’s rare to win on the road against Bo Ryan’s Badgers and it needs to be recognized.

4. Connecticut (7-1) – Ryan Boatright has already started to help this team and now the Huskies can also move up in the rankings next week if they beat newly-ranked Harvard this week.

5. Pittsburgh (7-1) – Still waiting for Jamie Dixon and Ashton Gibbs to really make this team move. After a weird loss to Long Beach State, the Panthers have won five straight. A positive is Pitt doesn’t play a ranked opponent until 2012, which means Pitt should be racking up more and more wins.