Here’s several UConn players as they discuss the 2011-2012 squad. I took this video at the annual Husky Run last Wednesday.

Check out the UConn Preview on dimemag.com

Last year’s Big East Conference regular season champion is plagued with postseason failure. A third-round loss in the NCAA Tournament to Butler didn’t help the Panthers case after a couple of hiccups in the postseason.

It’s another tough season in the Big East and to me the Panthers can’t keep up with the top tier, UConn and Syracuse.

Yes, they have Ashton Gibbs, one of the nation’s sharpest shooters, but I feel this isn’t nearly as good as last season’s. The only other returner is Nasir Robinson. Robinson is undersized, but is a hard-nosed player at 6-foot-5. Robinson will be teamed with Dante Taylor in the frontcourt, who is replacing the graudated Gary McGhee (I’m pretty sure McGhee’s ankles are still floating around the court of Madison Square Garden).

The Panthers will be a tough interior defensive team is freshman Khem Birch, a McDonald’s All-American can contribute early. But the frontcourt provides little on the offensive end.
Gibbs is going be more aggressive this season scoring. Pitt’s second option is small forward J.J. Moore.

This season postseason failure may not be a disappointed as I don’t feel this team shouldn’t have high expectations from the previous seasons. 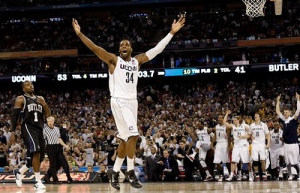 Kemba Walker left one year of eligibility on the table, opting to go pro, getting drafted by the Charlotte Bobcats.

Walker put up a season for the ages, but if it wasn’t for the play of his supporting cast, there’s no way UConn wins the national title.

Now the supporting class is in the driver’s seat ready to defend their title.

Napier looks to replace Walker at point. He’s a capable point guard with a knack for knocking down big shots.

But Jeremy Lamb is going to be the one to replace Walker as the go-to player. Lamb emerged later in the season and was the key to UConn’s march to the championship.

On August 26th, UConn got a commitment that every team in the nation was trying to get. Center Andre Drummond announced his commitment via Twitter.

“It’s official I’m heading to the university of Connecticut to be a husky this year! Do I hear #repeat #huskyfam @aoriakhi34” – @AndreDrummond03

Drummond is projected as the top pick in the 2012 NBA Draft, so his stay in UConn won’t be long. Drummond will start at center, moving the 6-foot-9 Alex Oriakhi to power forward, which is probably a more comfortable fit.

Drummond joins a team full of returners from the national title team. Even with Jim Calhoun missing the first three Big East games due to suspension, look for the Huskies to be the top team in Big East this season.